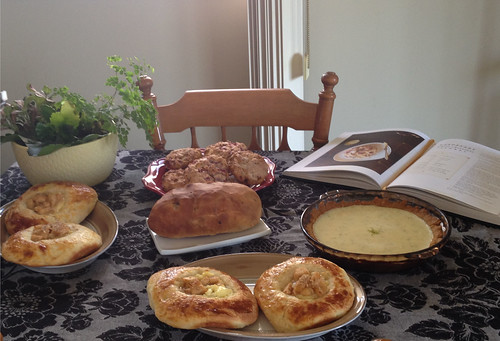 Cookbook parties are fun since majority of the recipes are quite involved and you’d get to sample different recipes from the cookbook. It felt like a fun casual hang-out at Duchess Bake Shop in Edmonton on 124 St, without the hustle and bustle. Plus, you get to eat everyone’s labour of love in indulgent bite sizes. It is completely possible to make the recipes without a stand-up mixer, but make sure to budget at least 15 to 20 minutes extra for manual labour.

This is a book worth having in your cookbook collection, if you are an avid baker. When I received my Duchess Bake Shop cookbook, I was initially overwhelmed with how complex many of the recipes were. Giselle writes each recipe step with so much love, attention and care. The process photos in the cookbook are very helpful; I have even tried to do it my way before doing Giselle’s method. There is a science to all this baking madness.

Turning my kitchen into a part-time patisserie would be romantically perfect if someone else could do the dishes for me! Baking during later stages of pregnancy is another fun issue altogether. I avoided making french macarons since I didn’t want to chance working with any temperamental egg whites. (Plus, almond flour is expensive.)

So, I decided to put my bread-making skills to the test instead; that way, I get to try two recipes from the cookbook, with ingredients I mostly have got on hand. (I just needed to make a quick trip to buy whipping cream. Otherwise, I had eggs, unsalted butter, flour, milk, dry Red Star yeast, sugar, salt, apples, cinnamon, brandy, vanilla and pre-homemade crumb topping on-hand.)

Brioche is not an easy bread to make. However, if you have followed along this old post of basic artisan bread making, brioche’s dough consistency is a lot softer (and sweeter) as it contains eggs and milk. Bread-making can be scary if you are new to it, but I promise you will get better with each attempt.

The trick of bread-making process is knowing when to shape and proof your dough. Since hand-shaping the brioche is an option, I chose this option as I could not see myself battling with lining a dozen of muffin cavities with regular parchment paper — for both the brioche as well as the custard.

If you were to read the recipe from start to finish, it is important to make your fillings first, as you would need to freeze them for at least 4 hours. So, I woke up at 5.45 am and started making the custard filling. Since I do not have any specialty parchment liners, I used regular parchment paper and my little Pyrex saucers. 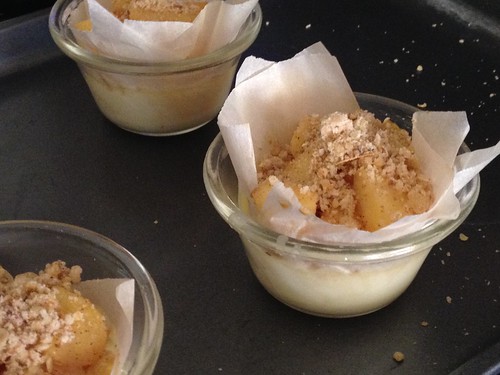 The custard was en pointe. I probably shouldn’t have tasted the custard before transferring them into the brioche’s cavities. You won’t be able to taste the brandy after baking the brioche in the oven though.

My attempt at the brioche is rather comical despite being successful in the end. I was getting exhausted from being on my feet all morning, with a nearly 38-week pregnant belly.

I ended up “McGyver”-ing the Duchess cookbook’s recipe for classic brioche, partly due to pregnancy brain, as well as not having fresh yeast (which is a lot wetter than dry yeast). Time was also running out.

Oops, I had “baby brain”:
– I had forgotten to add eggs in Step 2 on page 83!
– I was puzzled why my dough wasn’t mixing properly. (Duh, without the eggs, the dough won’t stick without ‘liquids’ — eggs will make the dough wet enough) I added warm water in lieu of the eggs.
– I didn’t read page 19 (a note on INGREDIENTS) on substituting fresh yeast with dry yeast. So, I ended up using 1 tbsp of dry yeast mixed with microwaved milk instead of halving the amount of yeast. It, however, didn’t affect the end product.

It wasn’t until Step 7 (the one step after rising the dough until doubled in size, wrapped in plastic cling wrap) was when I realized that the eggs were not going to show up past Step 2. The consistency of the eggless dough was not very pliable. It really needed eggs the recipe called for.

Back in the stand-up mixer it goes. Now, the liquid/flour ratio is off. So, I gradually kept adding flour until I achieved the optimal bread dough consistency: not too wet and not too dry. It is pliable and soft. Since I would be hand-rolling the dough on a floured surface, I don’t want to add too much flour. I found dusting the brioche dough lightly, by dusting your hands, helps as you punch it down. I used my hands to roll the dough into a rectangle before cutting into four portions.

It was a huge sigh of relief as I reached step 15, after brushing the brioche buns with beaten egg yolk: 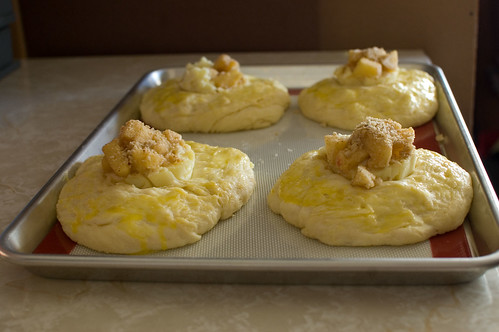 The Duchess cookbook isn’t that scary once you’ve tried it. It walks you right through why weighing your ingredients will produce better results. Some recipes, however, can be daunting if you don’t know where to get the ingredients.

Tip: You can get fresh yeast from most local bakeries and organic grocery stores. Italian Centre and Handy Bakery in Edmonton carry it. For lavender and other more gourmet ingredients, you can check out Barb’s Kitchen as well as Duchess’ Provisions store.

I got 1 out of 2 recipes right. That’s not bad for a start! Would I make brioche again? Absolutely! Don’t fret about perfection — just have fun!

(Full disclosure: Duchess Bake Shop cookbook contains an Amazon affiliate referral link. Clicking on the link would redirect you to Amazon’s website, whereby you can make any purchases safely and it would help me earn a tiny commission.)