Armed with a rubber spatula, 1/2 tsp, a 1/4 measuring cup with a 1/4 tsp end and a rolling pin in a backpack, I really didn’t have any idea what the kitchen goddesses as well as AirBnB (along with hostels) have got in store for me when M and I went to the United Kingdom for our honeymoon this past summer.

It was rather amusing and ironic that the not-to-be-named air flight we used had Anxietyville as a movie option. Our connecting flight to Toronto got bumped back 55 minutes because the flight we were supposed to be boarding was overbooked by business class seat-holders. We had exactly 6 minutes from the time the aisle was moving until the departure gate to the UK closes at 5.45 PM. We watched an episode of KWRP for comic relief instead.

Traveling with (massive) backpacks is hard work. Poor M; he was the one carrying our groceries along with his backpack; we had packed delicious items found at Borough Market, London. Comfortable shoes is a must. After a tiring trek between George Street and Buchanan Street in Glasgow, we boarded ScotRail to head onward to much needed relaxation. We were very fortunate enough to share a taxi with two Bo’Ness residents; our taxi driver helped us identify the location of our AirBnB accommodation.

One of the reasons why we picked this AirBnB accommodation was that we were able to obtain our hosts’ permission to use their gorgeous hand-built clay pizza oven. They had a lot of troubles trying to get the black pipe piece from Spain. 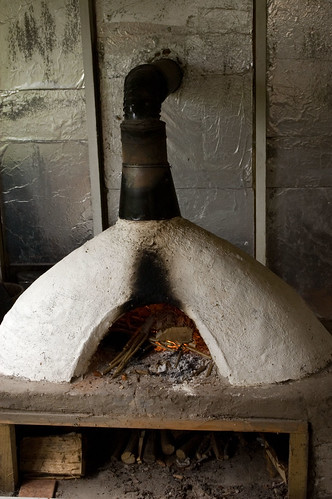 Bo’Ness is a gorgeous town to escape city-life (and other tourists). 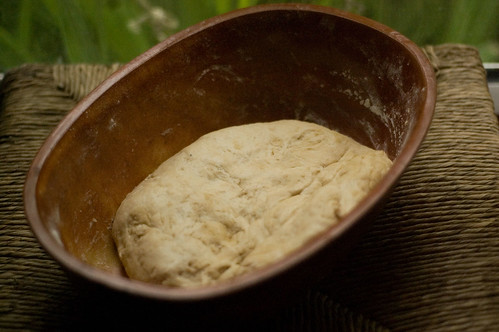 After preparing the beer pizza dough (recipe below) and covering it in cling wrap, our gracious hosts, B & D, took us to the Falkirk Lock where we rode Peddle on the canal to Lock 16 for a pint. I had meant to roll some dried thyme into the dough, but it was probably better to keep this beer pizza dough rather basic, so that I could figure out what beer does to pizza dough. B told me that she covers her pizza dough in a wet tea-cloth; that works too — covering your bread or pizza dough in cling wrap helps retain the moisture and an even temperature a lot better; there’s no worry of finding a draft-free spot.

I would stay away from hoppy beers (like IPA) unless you’re a huge fan of hops or have got ingredients to complement the citrus-like flavour; adding beer to pizza definitely enhances the basic pizza dough’s flavour. D had some home-brew on hand, so we used some of his brown ale. 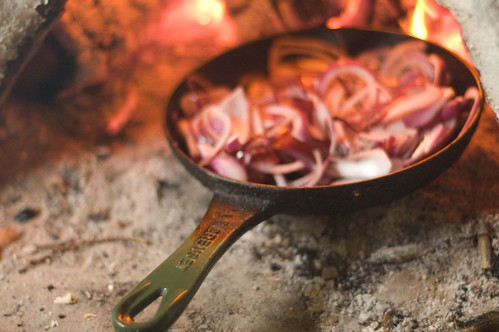 Since B is a vegetarian, I used meatless toppings for one of the two medium rolled-out beer pizza dough: olive oil, pizza sauce, thinly sliced apples, caramelized purple onions, and sliced goat cheese. 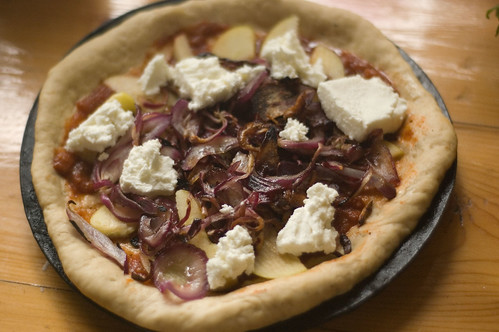 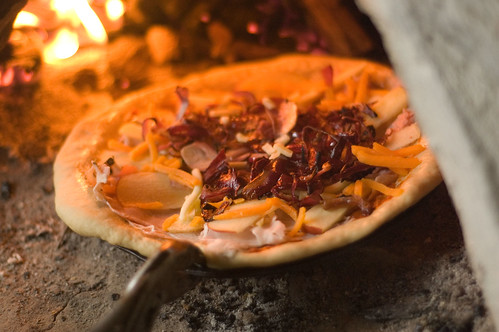 We were so hungry when both pizzas were done. I had forgotten to take more pictures of the pizza garnished with basil. Adding basil from B’s greenhouse was a pure delight.

So, here’s a photo of the basil instead — it added a sweet bite to each pizza slice; all photos were shot with a Nikon D-40, using either a 1.8mm lens (for close-up shots) and the 18mm to 55mm for the pizza oven: 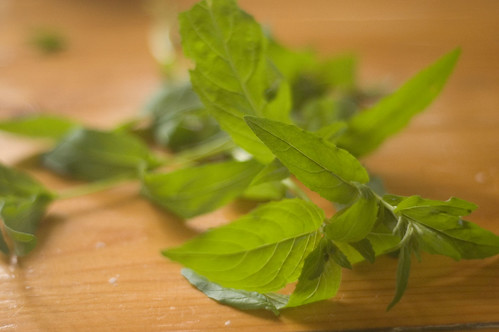 Thank you, B & D for your generous hospitality! The Scottish countryside was a pure joy to explore on bicycles!

If you are planning to visit the UK and are wishing to travel by rail, look into getting ACP Rail Pass. Other fun things I’ve learnt along the way: while having self-catering facilities in hostels is great, it gets too hectic to craft a dish to blog about when you are sharing the kitchen with many others.

Oh, and AirBnB is awesome.